A funny thing is happening in grocery stores across the nation.  People are reaching for organic foods in greater number – including craft soda.  This, from a report from the USDA that documents the progress strength of the organic market in sales. [1]  The progress is not slight but shows a year-over-year trend of significant market growth.  This trend is not limited to just grocery stores.  Explore how organic and craft sodas are taking the world by storm.

The Organic Market Across Industries

The largest group of organic products is produce – fruits and vegetables.  While healthy fruits and veggies are a main staple of consume 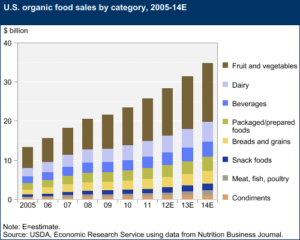 rs, organic and natural soda and beverages made up 11 percent of the organic market in 2014.

The positive growth of organics is not surprising as outside influences drive consumers towards organic foods.  From the public perspective, there are many concerns over the health implications from food dyes, GMOs, overly processed foods, etc.  These concerns are founded in medical studies and stem from decades-long ad campaigns by groups such as the:

Health is a major concern of consumers and is becoming a focus of how markets react to products and how consumers are taking their concerns outside of traditional markets and creating new markets where small brands are thriving.

House-made artisan soft drinks ranked number one in a survey of professional chefs with 61 percent of the responses stating they anticipated this style of beverages to be a “hot trend” for restaurant menus in 2017.  That is somewhat amazing as coffee elicited a response from 55 percent of the surveyed chefs.  In a drastic comparison, sparkling water was listed only 18 percent of the time from those surveyed and asked what they predicted to be the trends for non-alcoholic beverages for 2017. [2]

What is the Draw that Makes Craft Soda so Hot?

One of the biggest influences within the craft soda market comes directly from the craft beer market.  The idea that small-batch processing provides high-quality refreshments is spot on with consumers.

In the 1970’s small brand sodas were absorbed or driven out of business by the big soda companies.  Powerful trends such as shelving contracts with grocery stores pushed out other competition until all that was left was either Coke or Pepsi.  However, the craft soda category, including organic and natural sodas, continues to turn the tables on big-league brands in a push that demonstrates that local markets are stronger than national markets.

Small batch production and in-house craftsmanship draw on the pressures that push consumers toward organic and natural products.  Consumers want organic and natural food options not only at grocery stores but at restaurants and from vending machines too.  One has only to look at the expansion of vegetarian and vegan items on a menu to see the impact of consumers on local markets.  Like the craft beer industry, craft soda is making an impact through restaurants and vending stations.  They have also become a focus for the under aged participant at festivals, fairs, and local events.

Festivals – A Market of their own

Festivals are huge and they themselves are their own consumer industry.   Thousands of festivals will take place this year in the United States and internationally. [3]  These are each a haven for local brands that will engage consumers at the grass-roots level. Entertainment venues such as festivals are a gateway for new brands to build a following, increase brand awareness, and to compete with big-brand alternatives.  Festivals work both for the beverage crafter and for those people who are looking for new brands to appease consumer demands.  Another great thing about festivals is they make it easy to taste-test local brands without being in a sales environment and that makes them powerful within the local market.

The big deal about festivals is that they open markets.  They are independent of the traditional brand/consumer bridge and they disrupt traditional markets.  Other factors that draw the consumer to organic and craft soda include some of the most powerful marketing tools around. Social media, big data, and even artificial intelligence are changing how consumers relate to brands.  Those tools help to exploit the weaknesses in big-brand soft drinks and emphasizes something that is in the forefront of consumers’ minds – Health.

Health Concerns – Consumers Becoming more Aware of what they are Drinking

While Coke and Pepsi are fiddling around with can size [4] to reduce the sticker shock of their nutritional labels, organic and craft sodas are striking hard with big buzz words like natural ingredients, natural sugars, reduced calories, and other terms that align consumer health concerns with food choice habits.  The process makes it easy for consumers to reach for an organic or craft soda.

Where does this leave big brand soft drinks?  Scrambling is a good word to describe their actions. Yet, craft sodas and organic beverages still only make up a small percentage of the carbonated soft drink and soda markets.  Their presence is concerning to industry giants that have always smashed the competition.  However, like the old adage says — If you cannot beat them join them.  As a result, expect these large beverage magnates to either buy out successful small brand organic soft drink producers or begin to create their own organic brands. Recent history shows both of these actions are in full swing.  Will it be enough to sway consumers?  Probably not, but that conversation is for a later date.