If you don’t know much about the pecking order in a restaurant, it’s likely because you haven’t worked in one before. The separation between the front and the 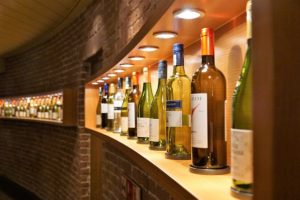 back of the house (i.e. the line cooks and a sommelier for instance) is almost as wide as it is between a Wall Street broker and the person who shines their shoes. Some attention has been called to this phenomena over the past several years, from how people are paid to how they’re trained, which has led restaurants to make some concrete policies when trying to close the gaps.

One of the smarter ways a restaurant can see more unity between everyone is by trying to get the cooks and the sommeliers to be on the same page. So what better way to bring everyone together than with a bottle of wine and some good conversation? See why this makes the whole establishment a lot stronger and the customers a lot happier.

A sommelier can be defined differently depending on who you speak to, but generally it’s their role to be experts in both the wine and food in any given restaurant. It’s their role to help customers pick not just the right red, white or rosé, but also to know the beers, ciders and cocktails on the menu too. Typically sommeliers will have had a mix of both formal and informal training, but there’s no technical certification they need to achieve to earn the title.

A sommelier, a manger and a waiter all need to try the wines before they start recommending them to hungry customers. That’s just standard practice for any nice restaurant. These front-of-house employees are meant to notice how the flavors come together both in the glass and on the plate before they pair anything, and it’s not an easy task for even those with the best of palates.

But normally the line cooks have never let their lips wrap around any of the glasses that are featured in the front of the house. While the sommelier may put three different types of cabs on the wine selection because that’s the varietal of the month, the cooks who make the food are usually flying blind. They may not even see the wine list before it reaches the table.

Is the Separation Really a Problem?

The old logic might say that the cooks are there to rule over the kitchen only. They’re meant to find the produce and meats that are in season, and then use their expertise to find clever ways of preparing it. They have to make dishes different enough that the restaurant can please both a vegan and a hard-core carnivore. Cooks are tasked with introducing new concepts to keep the restaurant innovative enough to stay in the public eye. What they’re not there to do is cater to a wine list — the wine list is there to cater to them. Certainly a prep cook who’s spent 9 hours chopping vegetables doesn’t need to try a $75 bottle of chardonnay.

But there’s a lot to be learned when a chef has the opportunity to taste the wine in relationship to the ingredients they have at their disposal. They may notice how the balance of acidity or saltiness either helps or hurts a particular grape. He or she may start to understand more about how unusual pairings work together. They may find out that if they tweak a dish just so, they’ll end up with a truly amazing result. Without having this type of advanced insight, any restaurant may have a difficult time keeping their competitive edge in a rapidly changing world. And that lowly prep cook? They just might be the one to get the ball rolling.

Wine on the Line

In Houston, you’ll find a restaurant called Underbelly that has put a few strict rules on how they conduct business. Wineries must be family-owned, they must be family-operated, and they must be delicious. The sommelier only wants wines that are made by hand, which is the same way he enjoys his food. This is a place where you might get some history along with your wine, considering many of the wine-making families go back generations.

This is also a place where they’ve incorporated an event to start making the front and back of the house a much more interactive experience. Through the appropriately dubbed Wine on the Line, chefs and cooks can now taste what the customers are tasting. It’s giving them a lot to think about as they get a sense of the specific flavors of different regions throughout the world. When the cooks first tried a type of Austrian red wine (Blaufränkisch), they were impressed with the way the spices, cherry, and earthy tones all came together. Instead of just enjoying the wine, they took it upon themselves to create a gochujang flank steak for customers that would pair perfectly with the Blaufränkisch.

If you want to be a part of the craft beverage industry, you have to stay on top of the trends. When cooks aren’t given priority, the food suffers. When the food suffers, so do the wines. While there’s no doubt that many (most) restaurant owners aren’t itching to give away some of their most expensive wines to a person who will never interact with a guest, that doesn’t mean they’re making the right decision. It’s really a huge opportunity (perhaps hidden in disguise) to start selling.

People are expecting more when they go out to eat, and those expectations are part of what elevate the experience of sitting down to a gourmet meal. The other part is being able to predict what people will want before they even know they want it. By creating a dish that makes the wine and the food taste better simultaneously, you’ve created a situation that a customer can’t find anywhere else. This ultimately translates to better word of mouth, more press, and higher revenue.

There’s no doubt that this type of movement is still in its infancy. It may become normal practice or it may fall to the wayside. But when anything and everything that touches the tongue has the potential to make or break a lunch or dinner, there really should be more consideration given to how the cooks are feeling about it all. When sommeliers and cooks find more common ground, they have much more opportunity to collaborate together to make the restaurant all it can be.